The destructive harassment of a small business by the ATO
Official investigation says there is no basis in fact for the ATO’s action
Apology and compensation should be paid, says report

Note: Highlighted references are to links in an official report referred to below.

From about May 2012 to 2015 the ATO was defrauded of an estimated $2.45 billion (Annex B par 16) of GST payments by international criminal syndicates trading in gold bullion. The scam was simple. The criminals sold supposed impure gold to gold refiners for refining into pure gold (in other words, melting the gold down and removing non-gold impurities). The refiners paid the sellers (not knowing the sellers were criminals) for the gold which included GST as required at law. The sellers were supposed to pay the GST to the ATO but then disappeared. It is believed that some of the criminals were ISIS-associated.

The scandal was and is a massive embarrassment for the ATO. The ATO was well warned about the scam, which first occurred around 2003 in the UK. The solution was simple—namely, to change the law to require the refiners to pay GST directly to the ATO at the point of purchase of the gold. The ATO was repeatedly warned in the media between about 2014 to 2016 that a gold GST scam was likely occurring in Australia. Some gold refiners reported suspicious activity and persons to the ATO. But the ATO did not have the law changed until 2017.

Comment: It could be speculated that the scam had some element of ATO internal corruption occurring to allow the scam and fraud to occur. This has never been investigated but surely an investigation would exonerate the ATO. However, a major public inquiry is warranted.

In response to the ATO’s ‘discovery’ of the scam around 2013 (Annex B par 6) the ATO began enforcement processes to try and stop the scam and recover money.

Comment: Even though the ATO knew about the scams in 2013, it did nothing to change the law until 2017. This raises further suspicion of least massive incompetence or worse.

The ATO’s tactic against the refiners has been to recover money by withholding GST refunds due to the refiners. The ATO has justified its tactic by alleging that the refiners were in collusion with the criminals or should have known that some gold sellers were criminals and should not have bought gold from those persons.

Comment: It is probably fair to say that some refiners were in collusion with the criminals, but that would depend on hard evidence to a criminal standard given that such collusion would be criminal in itself.

Lynn and Jerry Reid are married. They migrated to Australia from the UK in 2005. Jerry was a recovery diver for the Royal Navy, then a security specialist in UK Prime Minister Tony Blair’s elite protection squad. On migrating to Australia, Jerry served in the South Australian and then the Queensland police forces. Lynn served in the US Navy with high-level security clearance. In Queensland, Lynn worked for a small gold refiner on the Gold Coast, Precious Metals Technology (PMT).

In 2015 Lynn and Jerry decided to sell their house to fund and start a small business for themselves. They purchased the small Gold Coast refinery business from Lynn’s employer, a couple who were retiring after starting and running the business from 1997.

The ATO and the Reids

Before buying PMT the Reids checked that the ATO was not investigating the business for the GST fraud scandal. The evidence was that the ATO had audited PMT and advised that no debt problems existed, and the audit was closed. 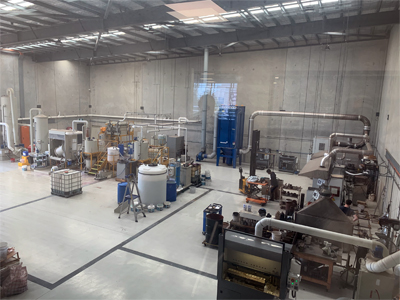 In July 2016, the ATO refused to pay to Lynn and Jerry the GST refund they were entitled to.

Between July 2016 and January 2017, the ATO refused all GST refunds, withholding from Lynn and Jerry a total of $1,309,565. Even though the ATO had all of the Reids’ money, the ATO declared that the GST money the ATO held onto was a tax ‘debt’ and imposed an additional debt ‘penalty’ of $502,856.

That is, even though Lynn and Jerry did not physically owe the ATO any money (the ATO had all the money) the ATO declared a ‘debt’ and created an additional ‘debt’ out of thin air.

Subsequently the ATO reviewed the GST withheld refund and said it had made a calculation error and the actual ‘debt’ the ATO should hold onto was/is $978,816. That is, the ATO said it should refund $329,749 to Lynn and Jerry. But instead of giving them the money, the ATO did an accounting trick and deducted the refund from the ‘out of thin air’ penalty debt the ATO had created.

(Note: In gold refining the amounts of money involved are large but the refiners’ income is the money they earn on the actual refining. The GST amounts are large and obtaining prompt refunds is critical to the cash flow and viability of the business.)

On 6 and 7 March 2018 the ATO ‘garnisheed’ Lynn and Jerry’s business and personal bank accounts (par A7). This meant that their bank accounts were frozen, effectively stopping them running their business and their personal financial lives. Lynne and Jerry were totally compliant with their PAYG and superannuation obligations.

The Inspector General of Taxation and Taxation Ombudsman (IGTO)

That is, the IGTO cannot investigate or make comment on whether a debt (for example) is actually owed as a matter of fact. But the IGTO can make conclusions as to whether the ATO has followed lawful process.

The IGTO has begun a second investigation into whether the ATO acted lawfully in the processes the ATO went through in withholding Lynn and Jerry’s $1,309, 565 of GST refunds. Lynn and Jerry are separately appealing the ATO on this matter—currently to the Administrative Appeals Tribunal. In other words, Lynn and Jerry say they have done nothing wrong and the ATO owes them $1,309,565 and that the ATO’s debt penalty against them is unlawful.

The balance of this briefing summarises the key findings of the IGTO investigation. (References are to the paragraph numbers in the 77-page IGTO report.)

The IGTO report is scathing of the ATO in the way it treated Lynn and Jerry. In our view the IGTO has effectively declared that the ATO acted unlawfully against Lynn and Jerry. The IGTO does not use the word ‘unlawful’ but that is the effect of what the IGTO says.

In other words, that the ATO breached the procedures it is required to follow at law in seeking to collect the (fabricated) debt of Lynn and Jerry (the $173,107).

The IGTO makes two recommendations. That the ATO:

Some of the IGTO evidence demonstrating the ATO’s breaches of the law includes:

Debt collection before debt due

ATO presumes guilt but no evidence

No allegations of criminality

The way Lynn and Jerry have been treated by the ATO is a scandal in itself. It’s yet another demonstration of the abuse of small business by the ATO. This was detailed in the 4Corners program ‘Mongrel Bunch of Bastards‘ in 2018. Nothing has changed since then.

Why, then, are Lynn and Jerry being targeted by the ATO?

We can only guess that it’s to do with a cover-up and deflection from the ATO’s huge failure or worse in the $2.45 billion GST gold scam. The ATO did nothing to stop the scam until it was too late. This demands a major investigation of the ATO. But nothing is being done.

We explain the case for prosecutions