Independent Contractors of Australia is frequently asked for statistics on the numbers of self-employed persons. The following statistics have been collated in response to those requests. ICA tracks these figures and updates them as new statistics become available. Self-employed people are people who work for themselves and who might either employ or not employ other people.

When this is analysed further: 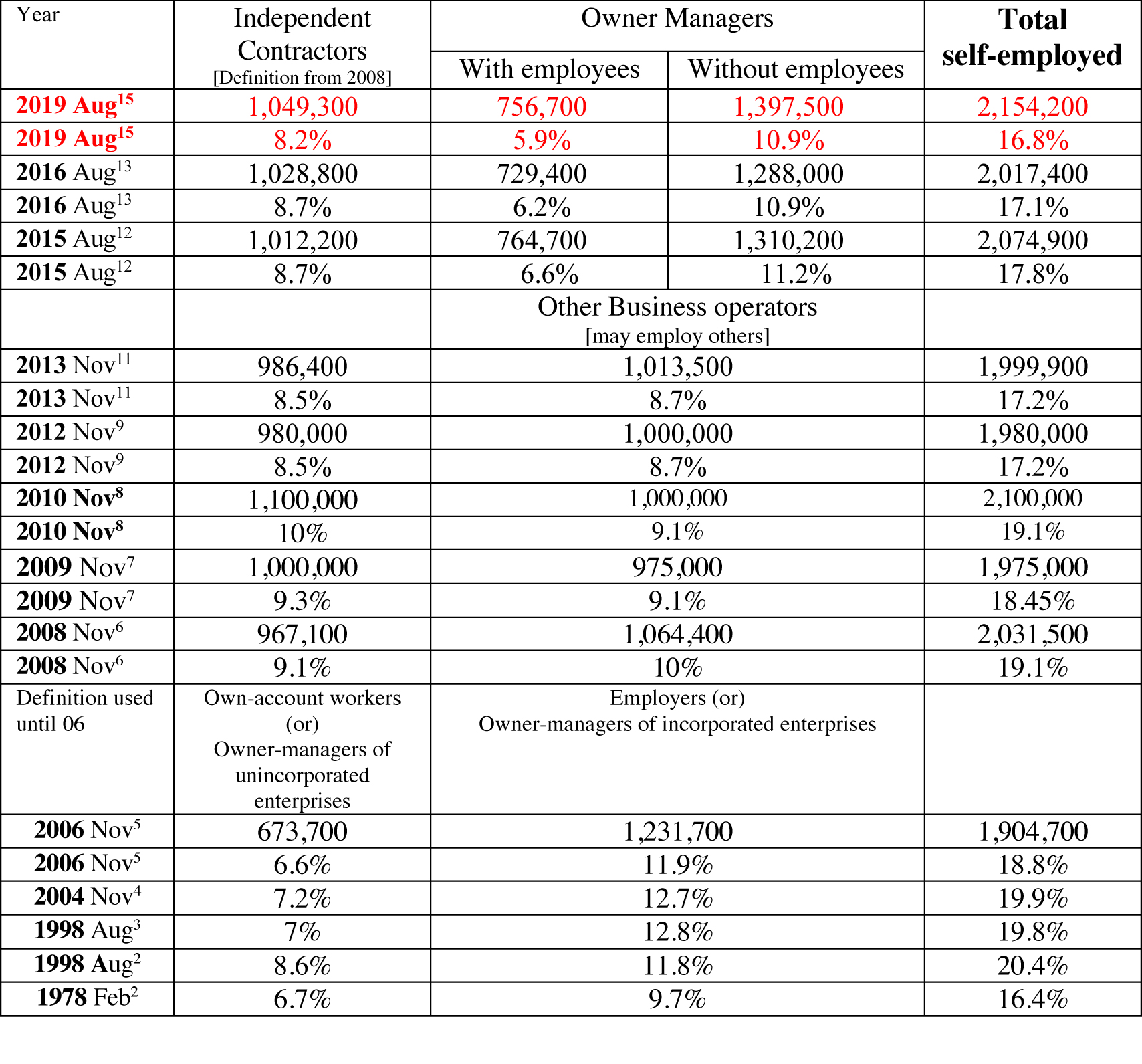 Of all businesses in Australia, 97% have between 1 and 19 people working in them. 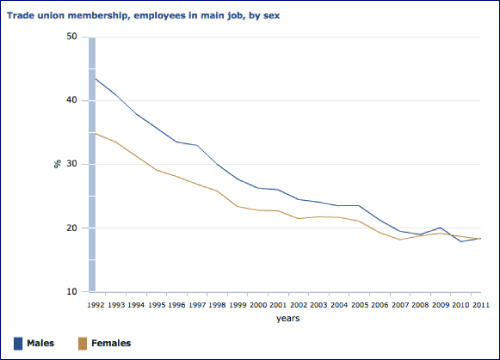 This counter-balancing trend has big implications for Australian policy makers and regulators, if they are alert! ICA Executive Director Ken Phillips explained this in part today in The Australian by looking at an October ruling in London where two Uber drivers were declared to be employees. He compares this to Australia’s new (and global leadership first) unfair contract protections for small business people.

Here are the latest Australian Bureau of Statistics figures on the number of businesses in Australia.

Note that 96 per cent of businesses are small.

The vast majority (96%) of Australian businesses are small businesses (that is, they employ fewer than 20 people, including non-employing businesses).

According to ABS data (6359.0 – Forms of Employment, Australia, November 2010), the self-employed in the workforce increased in both total numbers and percentage of the workforce during 2010.

How many people are employed by self-employed people?

This specific data does not seem to be summarized by the ABS. But by combining ABS data from the ABS survey 2001 (1321.0 – Small Business in Australia, 2001)
and updating it to 2010, some estimates can be made as follows:

When all self-employed people are combined with the employees who work in their businesses, up to 75 per cent of the total workforce (88 per cent of private sector) work in small and medium businesses. The following table shows how the figures are constructed.

The latest Australian Bureau of Statistics (ABS) figures are based on labour force statistics gathered in November 2008 and released in June 2009. They are available in PDF form here.

The figures are significant for two reasons:

Why the revised methodology is an improvement

ICA has always seen the terms ‘independent contractor’, ‘self-employed’, ‘micro/small business’, ‘consultant’, ‘freelancer’, etc., as highly interchangeable. The key identifier is the existence of commercial arrangements. It is the commercial fact that focuses ICA’s activities when arguing and discussing public policy issues. Nonetheless, the ABS
distinction between those who ‘manage and/or sell good/services’ and those who principally provide their ‘labour/time’ is a useful distinction which should aid future policy analysis.

The ‘other business operators’ are probably that group which most people think of when considering the self-employed—that is, a person running a shop, or selling something. This group probably doesn’t create a lot of confusion for policy analysts because they fit into a category of business that can be ‘seen’ and are tangible. They are the typical small
business.

The second category, ‘independent contractors’, is probably the group that cause most policy confusion because, for many observers, these people can appear to be ’employee-like’. It can be difficult to see this group as ‘being in business’ because there is often nothing tangible, such as a shop, for example, to point to. However, ICA believes that
these people are definitely in business and that their behavior and attitudes reflect this. What needs to be understood is that an individual can be a business. It is not necessary to have premises or sell goods to ‘be a business’. The ABS seems to have recognized this and accommodated it in its methodology.

Dependent contractor term removed
The 2008 ABS survey removes any identification of ‘dependent contractor’. This was an identifier used in previous ABS surveys. It has frequently been used by labour academics to suggest that there were independent contractors who were really employees. ICA has always argued that this was and is a legally and commercially illogical and false concept. It would be like arguing that there are ‘independent employees’. Both are concepts that confuse rather than assist policy analysis. The ABS seems to have dropped the use of the term ‘dependent contractor’, which is consistent with the dropping of the term by the ILO. ICA believes that removal of this term helps obtain greater clarity in data collection and its subsequent use for policy analysis.

Of the 2.03 million self-employed people:

Of the almost one million ‘independent contractors’:

Self-employed people are found in all areas of the economy, but heavier concentrations occur in construction, professional and scientific/technical areas, agriculture and the retail sector.

Comment
It is probable that, as the population ages (see graph below), more people are likely to be self-employed. It’s a lifestyle thing. When we are younger, we’re prepared to allow other people to dictate to us how we work. But as we mature, we become more experienced and sure of our business decisions. We want to control our own work and self-employment allows us to do this.

This will continue to present challenges for government and managers of employment-dependent firms. Governments will have to continue to review and improve their regulations to accommodate self-employed people. Firms will increasingly find that specialized and experienced talented people don’t want to be employed. Firms will have to discover how to engage and work with people on commercial contracts.

(1) Institute of Public Affairs: Just How Many Are There?

Note
Due to the change in methodology by the ABS (discussed above), specific comparisons between 2008 data and pre-2008 data should be treated with caution. However, observation of general trends is possible.

In 2007 ICA was invited to make comment on the ABS methodology review. Many of ICA’s comments appear to have been incorporated in the 2008 methodology.