It’s a couple of weeks since we updated you on the Not Above The Law campaign over the 801 Victorian Hotel Quarantine deaths in 2020. Here’s some info.

You may likely be aware that, on Wednesday 29 September, WorkSafe announced that it is prosecuting the Department of Health (but not responsible individuals). The announcement caused a storm of media coverage.

29 September was one year to the day that we sent our 131 application; the legal trigger that required WorkSafe to investigate with a view to prosecuting. The prosecution totally validates our campaign, demonstrating the correctness of both the issue and our pressure activity. The major media channels now view our campaign as significantly serious.

Magistrate hearing: Last Friday 22 October was the first Court hearing, a procedural matter where the date was set for the start of the serious legal process (10 March 2022).

Plead guilty? There is speculation that Health may plead guilty and pay a ‘round robin’ fine – that is, the government fines itself which means (effectively) no fine. The media have been on to this with commentary viewing this as a ‘con’.

Our campaign is now focused on pushing heavily for prosecution of the responsible individuals – that is, the Premier, Minister and government officials. This doesn’t mean that we say they are guilty, but rather that the evidence requires prosecution. I explained this in a 3AW radio interview (6 minutes) on 22 October:

TV advert #2 (30 seconds): Following the Health prosecution announcement, we have relaunched our TV advert on social media. See the refocused ad here. This is being supported by a hard-hitting on-line social media campaign (on Facebook & Google).

Radio adverts (30 seconds): A new radio advert is running this week on Melbourne 3AW, 7am to 10am with several repeats in each time slot:

NATL website: A dedicated Not Above The Law website was launched mid-September which has had strong traffic. Here’s the site: https://notabovethelaw.com.au/

To date we’ve had a big impact without needing court action. There have been 38 pieces of correspondence between Self-Employed Australia and WorkSafe over the last year. In addition, during September we wrote to the Attorney-General, Shadow Attorney-General, WorkSafe Minister, Shadow WorkSafe Minister, Ombudsman and the Solicitor-General. There has been careful legal guidance at every step. See information here.

We anticipate news about next steps in the near future.

What does the Covid modelling say?

You might be interested in some tracking of the predictions about the spread of Covid-19 since the last Victorian heavy lockdown started. The Table below shows what the Burnet Institute predicted would be the Covid impact during the heavy lockdown.

They said that (see page 7, Table 4, of their document) 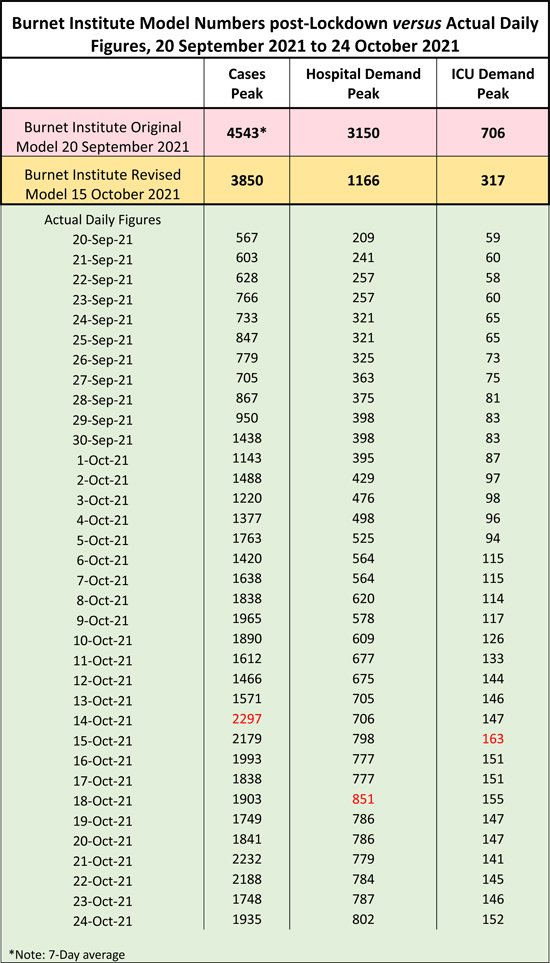